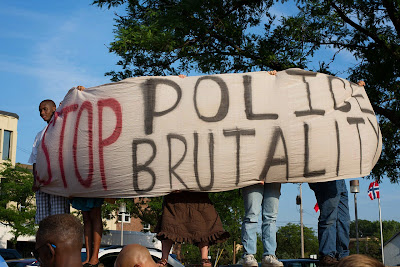 Although the shooting of Michael Brown is recent we have seen and heard this script before. Whenever there is an issue of race and the killing of a young black man by police we hear of the rights sudden "concern" on the issue of black on black crime. One issue has nothing to do with the other. The conservative talking heads and pundits bring up this red herring to avoid talking about the topic at hand. On a side note why don't we ever hear the term white on white crime? But back to the topic at hand.

To avoid talking about race conservatives throw out stories about the killings in Chicago and other urban areas. They also suddenly care about the lack of black fathers in the home. They question what those protesting or talking about the killing of a black man by a cop is doing to stop black on black crime in cities or states miles away. They bring this up knowing it has nothing to do with the murders of Michael Brown, Sean Bell, Oscar Grant, Ezell Ford, John Crawford, etc.

What gets me is no one ever turns to them and ask, "What are you doing to stop black on black crime?"

So my question to the right is why don't you care about our issues on a regular basis just not when you are trying to avoid a conversation on race?