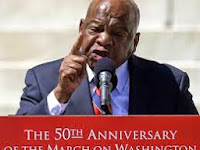 During an interview with Variety‘s “PopPolitics” on SiriusXM, Rep. John Lewis (D-Ga.), who helped lead the 1965 voting rights march in Selma, Ala., that became known as “Bloody Sunday,” said Ava DuVernay’s new movie “Selma” is “long overdue.” He als talks abut other aspects of the movie as well as watching himself being portrayed on film. Listen to the full interview below:

Posted by Councilman George L. Cook III at 6:18 AM