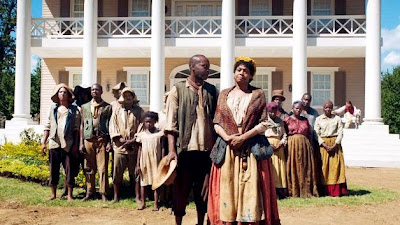 "Book of Negroes" is BET's first scripted miniseries, and is one of the most ambitious projects ever undertaken by the cable network, which targets African American viewers. It will air over the course of three consecutive nights in two-hour installments starting Feb. 16.

Based on the award-winning novel by Lawrence Hill, The Book of Negroes tells the story of Aminata Diallo after her capture and the pain she endured as part of the Trans-Atlantic slave trade. Starring Aunjanue Ellis as well as Cuba Gooding Jr. and Louis Gossett Jr., The Book of Negroes will premiere as an epic miniseries that highlights Aminata's powerful journey.

The mini-series is based on a book by Lawrence Hill, check it out on Amazon.