6 points Stephen A. Smith should keep in mind when discussing blacks voting republican. 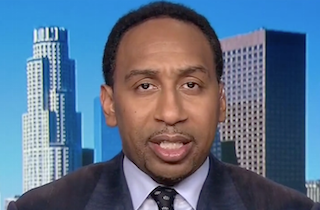 Stephen A. Smith made news for his receding hairline, naw just joking. Mr. Smith made news for his suggestion that in one election African American should vote republican. He believes and probably correctly so that the democrats take the black vote for granted, and they should be made to earn the black vote. No argument with him there. But from I heard Mr. Smith said he was asking African Americans to vote for people that they don't know.

Mr. Smith also stated that, “A vast majority of black Americans look at the Republican Party as the enemy.” He says that democrats have successfully painted republicans as such. That may be true, but I have a few points that Mr. Smith might want to keep in mind.

* If black voters did vote republican the republicans would repay them by enacting policies on education, housing, and healthcare that would be detrimental to many African Americans.

* As an elected official at the local level, I know there is one thing you MUST do if you want someone's vote. ASK FOR IT. Republicans don't come to black communities to ask, so why would anyone vote for them.

* For some reason, republicans still regard outreach to African Americans as "catering to a specific group", although when it comes to Hispanics they think differently.

* Democrats may have painted republicans as the "enemy", but that's the republicans fault for letting someone else paint their narrative and CHOOSING not to be there to refute that narrative.

* Optics. The republicans constantly do things that infuriate African Americans such as with the Loretta Lynch situation, always choosing the police side in the shootings of young black men, voter suppresion, finding new and inventive ways to attack the President of the United States, etc.

* It's not the job of black voters to for even just one election to reach out to the Republican Party, it should be the other way around.

I understand the intended point behind Mr. Smith's suggestion and thinks he has good intentions but I just don't think it's necessary to vote republican to get democrats to step up their game. Maybe African Americans just need to flirt with republicans (yes, I know that means we have to find one in our neighborhoods first but work with me here) I also don't think that Mr. Smith looked at the ramifications of such a vote. Of course that's just my humble opinion.

Posted by Councilman George L. Cook III at 8:20 AM