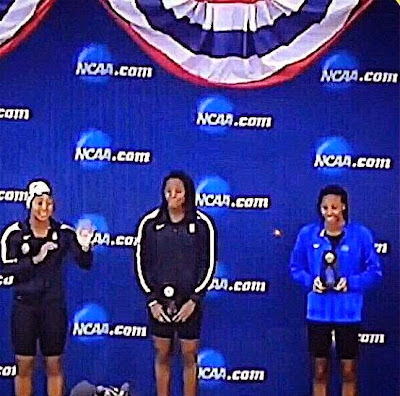 African-American swimmers took the top three finishes in a single event at the Women's Division 1 NCAA Championship this weekend, a feat recognized by the national governing body of swimming in the United States with a celebratory tweet.

Freshman phenom Simone Manuel of Stanford set an NCAA, American, U.S. Open, Championship and Pool record when she clocked a time of 46.09 in the women's 100 yard freestyle.

Manuel's Stanford teammate Lia Neal came in second place with a time of 47.13. (Fans may recall that Neal won a bronze medal in the 4x100 free relay at the 2012 Olympic Games in London.)

The University of Florida's Natalie Hinds swam a time of 47.24. Hinds reset her own-school record in the event during competition.