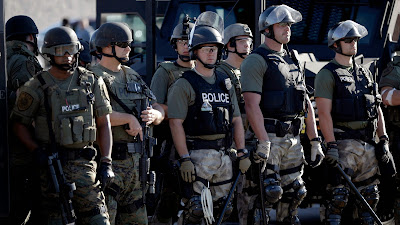 A Justice Department review has found that Missouri's troubled Ferguson Police Department engaged in a broad pattern of racially biased enforcement that permeated the city's justice system, including the use of unreasonable force against African American suspects, according to a law enforcement official familiar with the findings.

In 88% of cases in which Ferguson police documented the use of force, for example, that force was used against African Americans, according to the official who is not authorized to comment publicly. In addition, in all 14 canine bite incidents in which the suspect's race is known, the person bitten was African American.

African Americans account for 67% of the population in Ferguson, but they accounted for 85% of the drivers stopped by police, 90% of the people issued tickets and 93% of the people arrested, a three-year examination of suspect stops found. When those cases reached the Municipal Court, authorities collected more fines for suspects' failure to appear than any other charge, mostly from the city's poorest and most vulnerable residents.

African Americans were more than twice as likely than white drivers to be searched during vehicle stops, but 26% less likely to have contraband, the review found.

Investigators also recovered racially charged e-mails sent among employees of the police department and the Ferguson Municipal Court, which authorities said contributed to the alleged bias.

Among the e-mails was a missive apparently sent soon after President Obama's 2008 election. It suggested that he would not remain long in the job because "what black man holds a steady job for four years.''

Another May 2011 e-mail referred to an African-American woman receiving a "Crime-stoppers'' reward for terminating a pregnancy.