Lando Calrissian getting his own limited run comic book! 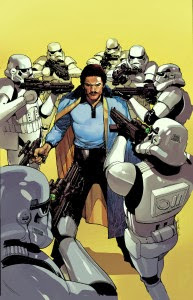 In Marvel’s Lando, developed closely with Lucasfilm, the titular character — in the days before he became a hero, but still with Lobot at his side — looks to steal one of the galaxy’s most valuable ships. But, as usual, he may be in over his head.