Why Nick Fury started to look like Samuel L. Jackson in 2001 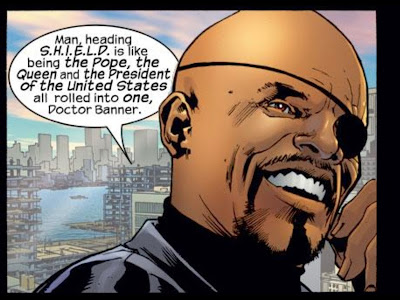 Mark Millar the writer of Marvel's Ultimates explains why, without permission he used Samuel L. Jackson's as the model for his version of Nick Fury starting back in 2001 to Business Insider. Read his explanation below.

[SOURCE] I wanted an African-American Nick Fury to be director of SHIELD because the closest thing in the real world to this job title was held by Colin Powell at the time. I also thought Nick Fury sounded like one of those great, 1970s Blaxploitation names and so the whole thing coalesced for me into a very specific character, an update of the cool American super-spy Jim Steranko had done in the 70s and based on the Rat Pack, which seemed very nineteen sixties and due for some kind of upgrade.

Sam is famously the coolest man alive and both myself an artist Bryan Hitch just liberally used him without asking any kind of permission. You have to remember this was 2001 when we were putting this together. The idea that this might become a movie seemed preposterous as Marvel was just climbing out of bankruptcy at the time. What we didn’t know was that Sam was an avid comic fan and knew all about it.