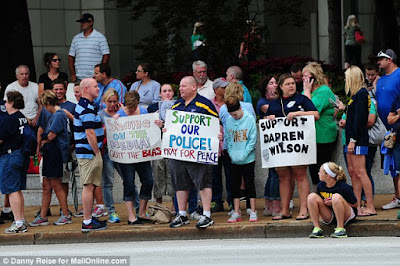 In light of the rash of videos showing police acting inappropriately toward African Americans there are two things we can expect whenever a video comes out. One being that everyone will see the videos and based on their own biases see what they want to see. The second thing is that conservatives/republicans/Tea Party will always side with the police and give them the overwhelming benefit of the doubt. Many African Americans will side with the victim because many have had or know family members that experienced their rights violated by the police. It's sad, but things always break down by race and political beliefs with this cases.

Conservatives will always find a way to side with the cop no matter what they see on video. They will post pictures of the victim holding up their middle finger or acting in a thuggish manner (even if it's not an actual picture of the victim), claim the kids were disrespectful, or if they are lucky find and post a victim's criminal record. They will do this to justify whatever the officer did as if past mistakes or teenage stupidity allows one to be beaten or shot. It's automatically assumed that the black victims were somehow at fault. They expect minorities to blindly show respect to people who in many cases show no respect to them.

There are two things that amaze me about conservatives/ Tea Party types always siding with the police.

One being that no matter how many of these videos come out, theses are always considered isolated incidents. Conservatives tend to believe that there are no bad cops just bad blacks that get themselves shot or beaten.

It's also amazing to me that people who are always spouting off about the government trying to violate their constitutional rights have no problem with police violating the rights of African Americans or other minorities. If you believe it's okay for police departments to police many minority communities the way that they do, then you believe in allowing them to routinely violate those people's civil rights. Conservatives should be the first to stand up and denounce inappropriate police actions if they truly believe the BS they spout.

Now of course that's not going to happen and one has to wonder why. Is it just having the utmost respect for law enforcement? Is it simply a blind eye to the realities of policing in minority neighborhoods, or is it due to the hue of the victim's skin as in good old fashioned racism or bias?