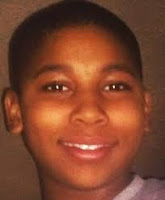 Saying they were losing confidence in the grand jury process, the activists instead asked a judge to order the arrests of the officers.

The move, known as an "affidavit of person having knowledge of offense," centers on a widely distributed security camera footage of the Nov. 22 shooting, that shows two officers, Timothy Loehmann and Frank Garmback, responding to a recreation center playground where Rice was playing with a pellet gun. Within two seconds of stopping, Loehmann, a rookie officer, shot him. Tamir died the next day.