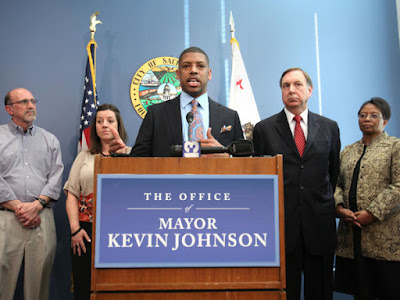 Amid sexual abuse allegations former NBA star and current Sacramento Mayor Kevin Johnson announced he will not be seeking a third term in office next year.

In a statement posted to his Twitter account late Tuesday night, he said he was "humbled" by the opportunity to serve and "he wouldn't change a single moment" of his time in office.

"After much thought and soul-searching I have decided not to run for a third term as Mayor. It was an incredibly difficult choice, but one that I feel confident about. As I'm sure there will be much speculation on this, let me proactively say that I am not leaving for another specific job or position. While there are many intriguing opportunities out there (and I'm excited to explore them) I honestly don't know what's next for me."

n recent weeks, Johnson has faced increased scrutiny stemming from allegations of sexual misconduct that took place nearly two decades ago. Last month, Deadspin published articles featuring a woman who alleges that when she was 16, the basketball star sexually abused her, then signed a draft agreement to pay her a six-figure sum in hush money.

"Johnson said resurfaced allegations of sexual misconduct against him had nothing to do with this decision, saying he has 'never made a life decision' based on those allegations.

" 'When it was time to run in the first place (in 2008), I would have never run if those allegations were something that concerned me,' he said.

"Johnson added he has no immediate plans to seek higher office after his term ends next year and indicated he will remain in Sacramento."

According to the Sacramento Bee, the allegations were first reported in 2008 by the paper, which said the accuser and Johnson "signed a draft settlement agreement worth $230,000."