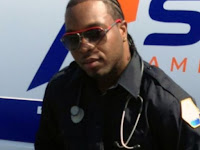 A New York City EMT who tried to save the life of a 7-year-old girl who choked on her lunch says he has been suspended without pay for making an unauthorized stop, according to local media.

Qwasie Reid and a partner were transporting a nursing home patient last Wednesday, local news channel NY1 reported, when they were flagged down in Brooklyn by a man who told them that a student was choking.

Reid told the station he believed a choking girl took priority over the transport, and, against his partner's urging, administered aid to the 7-year-old, who he said had already turned blue. No one at the school was assisting the girl, he said.