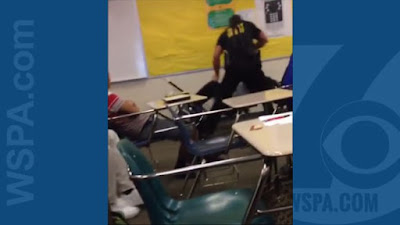 Richland School District 2 school officials have banned a school resource officer from the district in response to a video taken at Spring Valley High School (South Carolina) showing the officer slamming and dragging a black student from her desk. The student was asked to leave the classroom. When she refused, the officer was called in, according to WIS, a local SC TV Station. The officer, identified as Richland County Sheriff's Deputy Ben Fields, can be heard on cell phone video telling the girl to get up from her desk before the violence ensues. To be fair the officer contends that the female teenager who is probably 100 pounds soaking wet with two bricks in her pocket hit him first. Watch the shocking video below:

Posted by Councilman George L. Cook III at 5:48 AM