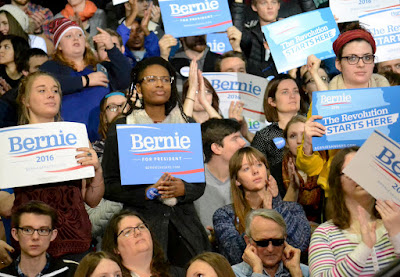 Bernie Sanders supporters are passionate in their support of their candidate, and there is nothing wrong with that. As a matter of fact it’s great that so many young voters are energized and excited about presidential politics.

What’s not exciting is that they knowingly or not have taken to using Republican tactics to attract black voters. Instead of working to make sure black voters know Bernie Sanders civil rights record and what his platform is as it pertains to African Americans, they are busy attacking Hillary Clinton.

Much like the Republican strategy has been used against President Obama they are letting us know what they are against but not what they are for. Talking badly about someone black voters like and respect does not help your cause at all. It hasn’t helped Republicans attract black votes, and it didn’t work too well in 2008 or 2012.

We are reminded ad nauseam about Hillary Clinton being First Lady during Bill Clinton’s criminal justice reforms, her super predator comments, and her treatment of #BlackLivesMatter. I can remember all of those attacks, but you know what I can’t remember? Bernie Sanders stance on issues that affect African Americans.

Whatever you think of Hillary Clinton she has put the work in with many in the African American community to earn their support. None of her supporters are going to change their minds because of a negative post on Facebook or a negative tweet on Twitter. Since many are older voters, they will ignore those type of post because they have better things to do than deal with negativity.

Try posting, tweeting, and talking about the positives for the candidate you support. If you want people to listen about Bernie Sanders talk to them and not at them, you just might get people to listen.

In the interest of full disclosure Mr. Cook is a Hillary Clinton supporter but a Democrat first.