Before we criticize Leslie Jones character in Ghostbusters... 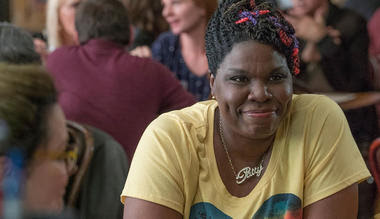 Leslie Jones is a very talented, intelligent, and gifted comedian which is why Chris Rock pushed for her to be a writer/actor on Saturday Night Live. This weekend with the release of the first Ghostbusters trailer, she felt the need to take to social media to defend her role in the remake of Ghostbusters.

Regular People save the world everyday so if I'm the sterotype!! Then so be it!! We walk among Heroes and take them for granted.

Most of the criticism focuses on her portraying a character that fits the stereotype of the loud black woman. There is also some question as to why she couldn't be one of the scientists and is just an MTA worker?

Both may be valid criticisms, but they are criticisms being made without people having seen the movie. At this point we have no idea what Jones' character arch is, we have no idea how the story unfolds or ends. Granted, what is in the trailer does appear to be the loud black woman stereotype but we don't even know if those scenes made the movie or if the movie explains her behavior.

I'm not saying that criticism isn't warranted, but I am stating that fairness is. At least wait until the movie is released before criticizing Jones and her character.

Until then watch the original Ghostbusters and see how Ernie Hudson's character became part of the team.

Posted by Councilman George L. Cook III at 10:05 AM