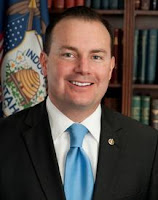 Federal aid is not needed in Flint, Michigan, where lead-contaminated pipes have resulted in an ongoing public health emergency, a Republican senator said Friday.

Sen. Mike Lee, R-Utah, said he is holding up bipartisan legislation to address the water crisis in Flint because Michigan's Republican governor, Rick Snyder, has not asked for federal help and the state does not need it.

"Michigan has an enormous budget surplus this year" and a rainy-day fund totaling several hundred million dollars, Lee said. The state has approved $70 million in emergency funding for Flint, and Snyder has requested at least $165 million more toward the Flint emergency.

"The people and policymakers of Michigan right now have all the government resources they need to fix the problem," Lee said. "The only thing Congress is contributing to the Flint recovery is political grandstanding."