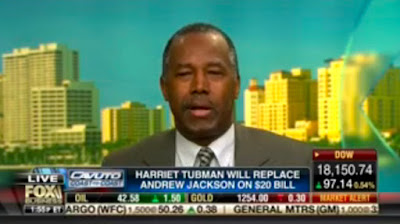 Today Treasury Secretary Jack Lew made the announcement announced that Harriet Tubman will be replacing on the front of the $20 instead of Andrew Jackson. Don't get too happy though. No time frame was given for when the change would actually happen although some speculate that it may happen by 2030.

That should be good news to most, but there's always one...

Ben Carson is determined to make sure he gets to play the role of house negro for as long as it's financially viable.

Ben Carson said Wednesday although he respects and admires Harriet Tubman, her likeness shouldn’t replace President Andrew Jackson on the $20 bill. Nope he feels Andrew Jackson, the slave owner should stay on because he balanaced the federal budget. I am not making this up. watch the video below.
Posted by Councilman George L. Cook III at 5:46 PM