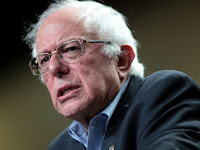 Black democratic leaders in southern states are not happy with Bernie Sanders after his rather dismissive comment on why southern black voters went for Hillary Clinton.

We commend you on running a spirited campaign that has energized and mobilized a new generation of voters, but we are concerned about the way you and your campaign have characterized the South.

As you may recall in 2006, the Democratic National Committee chaired by former Vermont Governor
Howard Dean took two historic steps towards diversity and inclusion.  First, the DNC modified its Presidential Primary process and added South Carolina and Nevada (states with sizable minority populations) to join the historic early states of Iowa and New Hampshire.  Governor Dean stated at the time that he “strongly believed in the importance of broadening participation in the nomination process to better reflect the rich racial, regional and economic diversity of the Democratic Party.”   Second, Governor Dean initiated a 50-state strategy to strengthen the Democratic Party and amplify Democratic voices in all states and not just states traditionally dominated by Democrats.

The greatest asset we have as a party is our diversity—a diversity of cultures, religions, ethnicities, experiences, and backgrounds.

Yet over the course of this Democratic primary, you and your surrogates have sought to minimize
Secretary Hillary Clinton’s victories throughout the South as a symptom of a region that, as you put it, “distorts reality.”  You argue that the South is “the most conservative part” of America; implying states that traditionally vote Republican in a general election are not worth contesting in a Democratic Primary.

There are several issues with these assertions.

First, according to the U.S. Census Bureau, “55% of the African American population lives in the South, and 105 Southern counties has a black population of 50 percent or higher.”  The African American community has been the most reliable and consistent vote for the Democratic Party for a generation, and in this year’s primaries, in the Southern states of South Carolina, Georgia, Mississippi, Louisiana, Alabama, and North Carolina, African Americans represented between 31-71% of the Democratic electorate.  To dismiss the importance of this region is to minimize the importance of the voices of a core constituency for our party.

Second, the Democratic Primary vote in Southern States was a crucial component for Barack Obama’s ultimate success in 2008.  Wins in South Carolina, and other southern states during the Democratic presidential primaries laid the groundwork for President Obama to build a message and campaign organization that resonated in North Carolina, Virginia, and Florida.  Many of the non-battleground southern states even utilized these networks to assist with voter outreach efforts, mobilizing thousands of volunteers to make calls and engage in GOTV operations.

Third, several of the states that you have won like Oklahoma, Idaho, and Utah overall are far more conservative in their general election results than the states in the South.  Moreover, current polls show that the Democratic electorate across the South is consistently among the most liberal anywhere in the nation.  In fact, some of the most liberal members of Congress hail from majority-minority districts in these states.  Regardless, it is important that Democrats in red and blue states alike feel supported by the Party and our presidential candidates.

Democrats ought to embrace the South and all regions to build an organization that can compete in all 50 states.  We must continue winning states like Virginia and North Carolina, and we can’t write off states like Tennessee and Georgia.  Even Texas could turn blue in less than a generation.  And beyond the presidential race, there are important statewide and other federal races happening every cycle.  Boosting Democrats’ chances in those seats is vital to enacting a progressive agenda at the local level and in General Assembles. This can only happen if we show up, speak to the region’s needs, and compete for every vote, even in the face of long odds.  That’s how change really happens.

Southern Democrats already have to deal with Republicans refusing to expand Medicaid, deteriorating infrastructure, and the lack of adequate funding for our public schools. We need our national Democratic leaders to invest in our races and causes—to amplify our voices, not diminish them.

In contrast, Hillary Clinton has spent her entire career trying to help people all across the South.  She saw a region full of families and children of every color, and instead of diminishing them, she worked to build them up. She is committed to a long-term strategy of rebuilding our state Democratic parties, to assist candidates up and down the ballot, and to serve as a voice for the voiceless.  She has not dismissed the importance of states that you have won, because she realizes s that to be President of the United States you have to be a champion for all of the states. To be leader of the Party, you have to be with Democrats in all states as well. That includes the ones you won and yes, even the ones you lose.

And that’s why we’re with her.


Posted by Councilman George L. Cook III at 9:37 AM