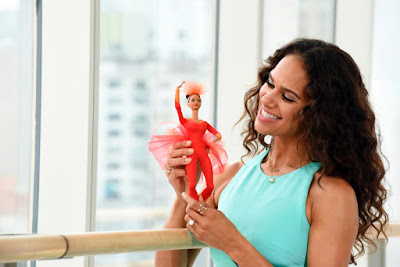 EL SEGUNDO, Calif., May 2, 2016 /PRNewswire/ -- Today Barbie® is honoring Misty Copeland by unveiling a doll in her likeness to continue to show girls they can be anything.  Copeland, the first African-American female principal dancer with American Ballet Theatre (ABT), has been a role model to girls throughout her career.
The doll is part of the Barbie Sheroes program, honoring female heroes who inspire girls by breaking boundaries and expanding possibilities for women everywhere. Copeland joins an esteemed group of diverse Barbie Sheroes, including Ava DuVernay,Emmy Rossum, Eva Chen, Kristin Chenoweth, Sydney "Mayhem" Keiser, Trisha Yearwood and Zendaya.
The fashions for the doll were inspired by Copeland's Firebird costume from her first American Ballet Theatre principal role, which she is performing again on May 18 (matinee) and 19 as part of ABT's annual spring season at the Metropolitan Opera House. Copeland was intimately involved in the doll's design and partnered with the Barbie design team on all the details.
"I always dreamed of becoming an ABT ballerina and through Barbie I was able to play out those dreams early on," said Copeland. "It's an honor to be able to inspire the next generation of kids with my very own Barbie doll."
Copeland shows girls how to break boundaries both on and off the stage. She began dancing on a Boys & Girls Club basketball court and continues to be very active in local Clubs in various cities. She also works with Project Plié, ABT's comprehensive initiative to increase racial and ethnic representation in ballet and diversify America's ballet companies.
"Misty Copeland is at the center of a cultural conversation around how women continue to break boundaries," said Lisa McKnight, General Manager and Senior Vice President, Barbie. "As a brand, we want to honor women, like Misty, who are inspiring the next generation of girls to live out their dreams. We know role play often leads to real "play" in life and we're thrilled to celebrate Misty with her very own doll."
This initiative furthers the Barbie "You Can Be Anything" campaign message echoing that when a girl plays with Barbie, she imagines anything she can become. Earlier this year, Barbie expanded their Fashionistas® line by introducing even more diversity with three new body types – tall, curvy and petite – seven skin tones, 22 eye colors, 24 hairstyles and countless on-trend fashions and accessories.
For more information and images, please visit www.barbiemedia.com. The doll is available today for $29.95on www.thebarbiecollection.com and rolling out to retailers nationwide.
About MattelThe Mattel family of companies is a worldwide leader in the design, manufacture and marketing of toys and family products. Mattel's portfolio of best-selling brands includes Barbie®, the most popular fashion doll ever produced, Hot Wheels®, Monster High®, American Girl®, Thomas & Friends®, Fisher-Price® brands and MEGA® Brands, as well as a wide array of entertainment-inspired toy lines. In 2015, Mattel was named one of the "World's Most Ethical Companies" by Ethisphere Magazine and in 2014 ranked No. 5 on Corporate Responsibility Magazine's "100 Best Corporate Citizens" list. With worldwide headquarters in El Segundo, Calif., Mattel's companies employ approximately 31,000 people in 40 countries and territories and sell products in more than 150 nations. Visit us at www.mattel.com, www.facebook.com/mattel or www.twitter.com/mattel.
© Misty Copeland Enterprises, Inc. 2016
Posted by Councilman George L. Cook III at 9:43 PM