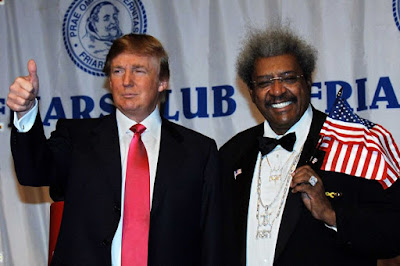 Donald Trump took to Twitter to announce that Don King, legendary boxing promoter to some or legendary crook to others had endorsed him for president.


Unfortunately nobody told (or paid) Don King who denies making any such endorsement. When asked about the endorsement by the NY Daily News “No,” said King at the funeral for Muhammad Ali. “I’m endorsing the people. I’m not a Republican or a Democrat, I’m a Republicrat, and I go with the will of the people. The only reason Trump exists is because of the will of the people.”
Now after the word no I have no idea what the f*ck King is talking about but he is not endorsing Donald "I lied" Trump.
George L. Cook III AfricanAmericanReports.Com