Wichita sit-in site will get memorial 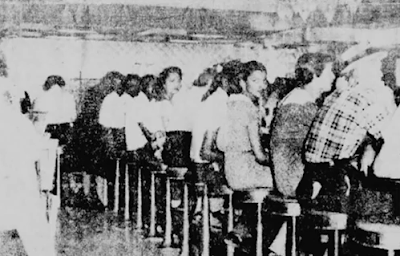 The site of an important civil rights sit-in in 1958 in Wichita will be getting a memorial for the first time.

Young black protesters sat at the lunch counter in the Dockum Drug Store in July 1958. After three weeks of sit-ins, the drug store agreed to serve the black students at the counter, the Wichita Eagle reports. It is considered one of the first successful lunch counter sit-ins in the nation that eventually helped lead to desegregation.

On Thursday, two participants in the sit-ins, Joan Williams and Galyn Vesey, attended a ceremony where the Kansas Health Foundation presented a $50,000 grant to the Kansas African American Museum and Ambassador Hotel for the memorial project. The Dockum Drug Store lunch counter stood in what is now Siena Steakhouse in the hotel.

“In the face of threats, in the face of name-calling and hate, they stayed strong,” said Steve Coen, president and CEO of the Kansas Health Foundation. Coen said that the foundation began discussing funding a memorial last fall.

Organizers have not determined what form the memorial will take, or what it will include. The memorial may include an indoor public exhibit on the second floor of the Ambassador Hotel and an outdoor recognition of the sit-in site with a plaque or statue. Tad Stricker, general manager for Ambassador Hotel Collection, says the hotel no longer has the original lunch counter and believes that it was removed during a remodel of the building in the 1970s.

According to Stricker, the hotel, which celebrated its 90th anniversary in May, has wanted to honor the sit-in since the hotel opened in January 2013. Mark McCormick, executive director of the Kansas African American Museum, said that he wants the public to help provide ideas for the memorial project and offer input about how the historical moment should be represented.

[SOURCE]
Posted by Councilman George L. Cook III at 8:50 AM