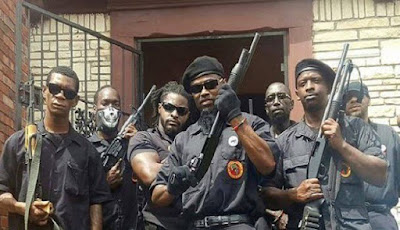 The New Black Panther Party, a "black power" movement, will carry firearms for self-defense during demonstrations in Cleveland ahead of next week's Republican convention if allowed under Ohio law, the group's chairman said.

The plan by the group could add to security headaches for the Ohio city after last week's killing of five police officers in Dallas by a U.S. army veteran who had been drawn to black separatist ideology, including on Facebook, before hatching his plan to target white police officers.

Several other groups, including some supporters of presumptive Republican presidential nominee Donald Trump, have said they will carry weapons in Cleveland, leading to concerns about rival groups being armed in close proximity.

"If it is an open state to carry, we will exercise our second amendment rights because there are other groups threatening to be there that are threatening to do harm to us," Hashim Nzinga, chairman of the New Black Panther Party, told Reuters in an interview.

"If that state allows us to bear arms, the Panthers and the others who can legally bear arms will bear arms."