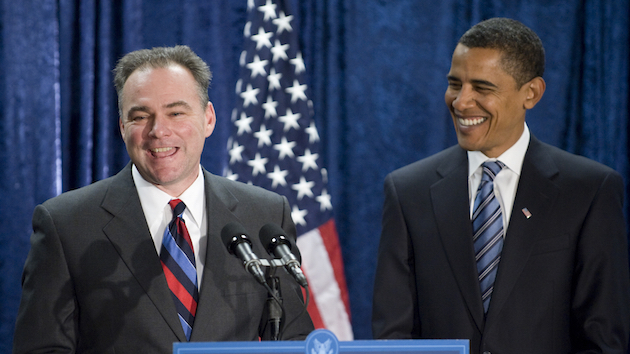 President Obama sent out a fundraising email praising Hillary Clinton's pick of Tim Kaine as her running mate. Check out his statement below:


I wanted to take a moment to tell you why I'm so proud that Hillary has chosen Senator Tim Kaine to join her on the Democratic ticket this fall.Nothing can really prepare you for this job. You come to learn that it's about having a firm grasp of the issues, sound judgment, and the tenacity never to stop fighting to make people's lives better.
The thing about Hillary is, she already understands all that. She does her homework, she masters the issues, and she never gives up. She gets the job done. And more than almost anyone I've worked with in Washington, Hillary's the kind of person who sees a problem and says, "How can I fix this? What can I do to help?"
But this job is also about surrounding yourself with the best possible people. And there's no more important decision you'll make as a presidential candidate than choosing a vice president. There are basically two paths you can take. You can pick someone for purely political reasons -- or you can pick someone who will be your partner in government. Someone who shares your values. Someone who will make you a better president.
That's why I picked Joe Biden -- and it's a testament to Hillary's character and integrity that she chose a man like Tim Kaine.
Like Hillary, Tim is an optimist. But like Hillary, he is also a progressive fighter. He's the son of a teacher and an iron worker who's always got working families on his mind. He spent nearly two decades and specialized in representing people who had been denied fair access to housing just because of what they looked like, or because they had a disability. And when a gunman killed 32 people on the campus of Virginia Tech, Tim knew he had a responsibility as governor to offer more than thoughts and prayers to the community he mourned with -- and as a gun owner, he stood up to the gun lobby on their behalf.
There aren't a lot of elected officials in Washington whom people like even more when the cameras are off than when the cameras are on. But Tim is that kind of guy. He's a man who's risen to the highest levels of government but still lives in the same neighborhood he did as a city councilmember in Richmond. You just can't find anyone with a bad thing to say about him, from the staff who've worked for him to the Republicans who've served alongside him.Simply put: Tim is a good man. He's a true progressive. And he will make a great vice president.
I could not be prouder to support our Democratic ticket -- please join me in welcoming Tim Kaine to this team.