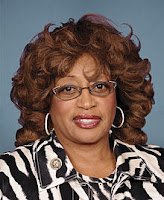 U.S. Rep. Corrine Brown of Florida and her chief of staff pleaded not guilty Friday to multiple fraud charges and other federal offenses in a grand jury indictment unsealed after an investigation into what prosecutors call a phony charity turned into a personal slush fund.

She has represented a Jacksonville-based congressional district since 1993 — one of the first three African-Americans elected to Congress from Florida since Reconstruction— and is seeking re-election in a newly redrawn district. Later Friday, Brown released a statement saying she was temporarily stepping down as ranking member of the House Committee on Veterans' Affairs, in accordance with House rules.