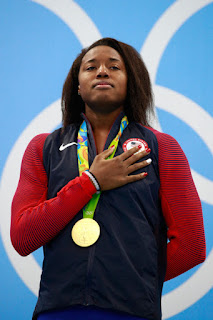 Simone Manuel won a gold medal in the women's 100 freestyle final Thursday night, surprising even herself.

Her jaw dropped as she looked up to the scoreboard and saw a tie for gold and an Olympic-record time of 52.70 seconds. A FINA official confirmed that Manuel is the first African American woman to win Olympic gold in an individual event.

The last time an American woman won gold in the event was 1984, when Nancy Hogshead and Carrie Steinseifer also tied.

This is the first tie for a gold medal since Anthony Ervin and Gary Hall Jr. did it in the 50 free in Sydney in 2000.