To my black brothers & sisters in Milwaukee: Don't destroy your own neighborhoods 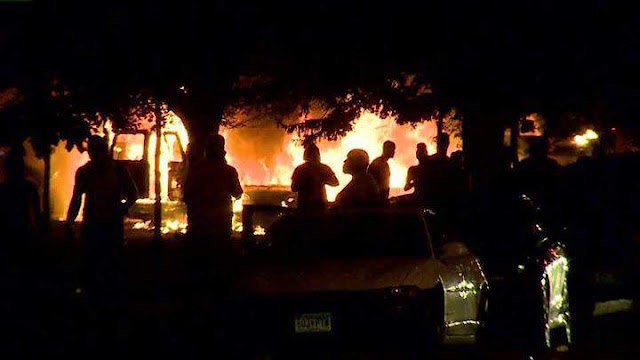 In the aftermath of the shooting protesters took to the streets of Milwaukee to voice their anger. Unfortunately many went further than expressing their anger, they burned down a gas station and several buildings in their own communities.

Again, we don't know much about the shooting but I do know burning down your own neighborhoods is stupid, and that just doesn't pertain to the current situation in Milwaukee.

I would like to ask those young men and women what do they think they are achieving?

I would like to ask them who do they think they are hurting?

We have always been told that violence achieves nothing. Well, that is wrong, it does lead to the destruction of neighborhoods that may never come back. The only people hurt by burning down buildings are those that live in the area now and in the future.

Does anyone really think the powers that be give a damn if black protesters destroy their communities? If you truly believe that there is institutional racism and that there are those that want to hold minorities back then stop helping those forces by destroying your own neighborhoods.

It can take decades for communities to bounce back after riots. It's been over 45 years since riots of the late sixties, and many of those communities have still not recovered. Today in 2016 it's still a big deal when a major retailer wants to open a store, or a developer wants to build housing in Newark NJ, Detroit, or Cleveland.

Riots only keep businesses from coming into our neighborhoods. When those companies don't come it limits access to jobs, fresh foods, medicine, and other goods and services a community needs to thrive. We are taking a bad situation with policing in our communities and making it worse by rioting.

I understand the frustration and anger. Many of us feel it, but we also know that violence is not the answer and that there is no simple or easy answer. I don't have all the answers, but it will take time for the policing situation in minority communities to be corrected. But if we all keep on it and vote in our local elections to get in people that will change things or to put out those that didn't.

I know many of you are tired of hearing about the power of your vote but you should be more sick of the needless destruction of our communities.

We are hurting no one but ourselves.

Righteous Anger cannot be told Where to Direct it's Explosion.

I am with you on this. Start suing police and their families. Defund police departments who don't protect and serve.