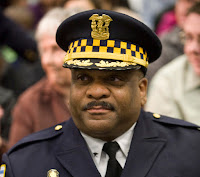 Chicago's police superintendent has recommended that seven officers be fired for lying in the aftermath of the fatal shooting of Laquan McDonald in October 2014.

McDonald's death was captured in a video that contradicted the accounts of officers.

Superintendent Eddie Johnson emailed police Thursday morning, telling them that he had recommended seven officers be fired for making false statements. He also stripped the officers of their police powers.

Johnson's move came in response to Inspector General Joseph Ferguson's recent report on the shooting in which he recommended that 10 officers be fired. But Johnson wrote that he thought the evidence against one of the officers was insufficient to recommend termination.