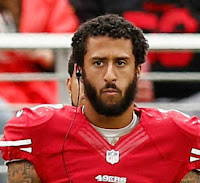 The White House said Monday that it disagrees with Colin Kaepernick’s “objectionable” decision to stay seated during the national anthem in protest but defended the San Francisco 49ers quarterback’s right to freedom of speech.

Asked for President Obama's reaction to Kaepernick's actions, White House Press Secretary Josh Earnest signaled his personal disagreement, but indicated he hadn't quizzed the president on the subject. But he did make the following statement:

“In general, what I can say is that I certainly don’t share the views that Mr. Kaepernick expressed after the game in explaining his reasoning for his actions,” Earnest said. “But we surely all acknowledge and even defend his right to express those views in the settings that he chooses. Even as objectionable as we find his perspective, he certainly is entitled to express them.”