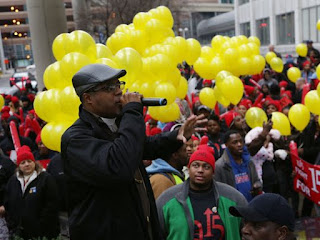 In an effort to reach out to African-American voters, Republican presidential candidate Donald Trump will make his first foray into black churches with a visit to Great Faith Ministries Church in Detroit on Saturday and tape an interview with Bishop Wayne T. Jackson.

Rev. W.J. Rideout III, Pastor of All God's People Church in Detroit, said he'll lead a protest at the church against Trump. He isn't upset with Jackson opening his church and TV network to Trump, adding, "That's business. But I don't want him to think that he can come in here and get our votes."

"Donald Trump is an opportunist, and this guy will reach out to get a vote from the worst fish in the sea. He doesn’t care if he gets a vote from a rock. He just wants to get into the White House," Rideout said. "He’s outsourcing jobs overseas. Yet you’re talking about making American great again."