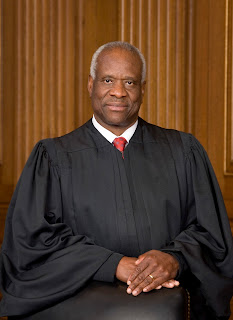 Many conservative websites have locked onto this narrative that Supreme Court Justice Clarence Thomas has somehow been snubbed by not being included at the National Museum of African American History and Culture. Now according to these sites we should all be outraged by this and demand that Thomas be included in the museum. They would have everyone believe that Thomas was not included because of his conservative beliefs and that most black people simply don't like the man (Okay that last part is true, but not why he wasn't included). But there are a few things they fail to mention.

Clarence Thomas is not the first black Supreme Court Justice, that would be the legend, Thurgood Marshall. So other than making it to the bench what has Thomas done to deserve an exhibit at the museum? He is considered a mediocre jurist at best and it's big news when the man ask a question during a hearing. You don't get an exhibit for being a bump on a log.

What's also not mentioned is that Thurgood Marshall is in the museum but not as a Supreme Court justice but for his work in civil rights. The museum does not currently have an exhibit on the Supreme Court.

Linda St. Thomas, chief spokesperson for the Smithsonian Institution, made this statement about Thomas’ exclusion:

“There are many compelling personal stories about African-Americans who have become successful in various fields, and obviously, Associate Justice Thomas is one of them,” said spokeswoman Linda St.Thomas. “However, we cannot tell every story in our inaugural exhibitions.” There is no exhibit on the Supreme Court or the justice system, the museum notes.

The late Justice Thurgood Marshall was featured in the museum because of his work on landmark civil-rights cases such as Brown v. Board of Education, according to the museum.