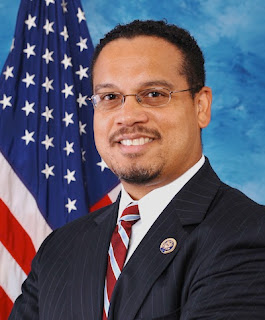 Well, the post-election intrigue has started in the Democratic Party after a devastating election day in which Republicans took the presidency and held on to both the House of Representatives and the U.S. Senate. After the horrible handling of the debates and the email leaks under Debbie Wasserman Shultz and the sad revelations about Donna Brazile leaking debate questions to Hillary Clinton, several Democrats are discussing vying to become chairman of the Democratic National Committee. One of those people is Minnesota Congressman and hardcore progressive Keith Ellison.

Rep. Keith Ellison, a leading progressive voice in Congress and one of only two Muslim Americans in the House of Representatives, has his eyes on becoming the next chair of the Democratic National Committee.

The Minnesota Democrat has been planning a run for weeks, and has begun informally talking to other party lawmakers and insiders about his prospects for the post, several sources have told The Huffington Post.

His name was floated as a possible DNC chair by Sen. Bernie Sanders (I-Vt.) on Thursday morning, giving him the type of institutional progressive support that would make his candidacy formidable. MoveOn.org, a major progressive network, also said in a statement that Ellison would be “an excellent DNC chair.”

Ellison’s identity as a black man and the first Muslim member of Congress would serve as a symbolic rebuke to President-elect Donald Trump. And his ties to Sanders would give him credibility in the progressive community that feels the party has catered too much to elite interests. He is also regarded as a savvy television presence ― which seems likely to be a major requirement for the job in the age when Democrats are out of power in every branch of government.