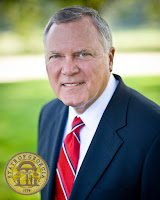 During a speech about an education proposal Georgia Governor and Trump supporter, Nathan Deal refereed to African Americans as colored people. Deal later tried to say that he was clumsily talking about the NAACP and apologized. Even with that apology the fact that he used the term "colored people" says a lot about the man's mindset. Watch more on this story below: