A group of elected New Jersey officials released the following statement in response to a Republican campaign flyer that is overtly racist. Don't take my word for it you can look at the flier and read that response below. 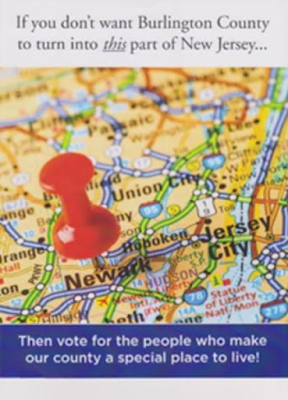 The Republican Party of Burlington County has mailed local residents an appeal for votes based on undisguised racism that relies on racial and economic stereotypes. The flyer states, “If you don’t want Burlington County to turn into this part of New Jersey, then vote for the people who make our county a special place to live. The mailer features a large map of northern New Jersey with Newark in large bold lettering and a large red push pin stuck into Newark.

The not so subtle message is that Newark and its suburbs are all that white voters fear in a community: Black, Latino, Poor, Dangerous, and Blighted. The characterization is slanderous and false. It exploits the worst racial stereotyping. The message is that if you elect Democrats, minorities will take over your community and destroy it. You will be driven out.

The theme of the Burlington Republicans is the same divisive rhetoric as the Trump campaign and its cheerleader-in-chief, Chris Christie. The Trump campaign is toxic and contagious. It’s blatant racism has emboldened local Republican candidates and given them permission to campaign on a message that has heretofore been confined to white supremacists. We urge the voters of Burlington County to come out and vote in record numbers this year. Every vote against the Burlington Republican candidates and against Donald Trump will send a message that our communities reject those who seek to divide us for political gain. And we call on our legislative colleagues of both parties to stand with us and denounce the hateful Burlington Republican campaign.