So, Ben Carson may serve in a Trump administration after all? 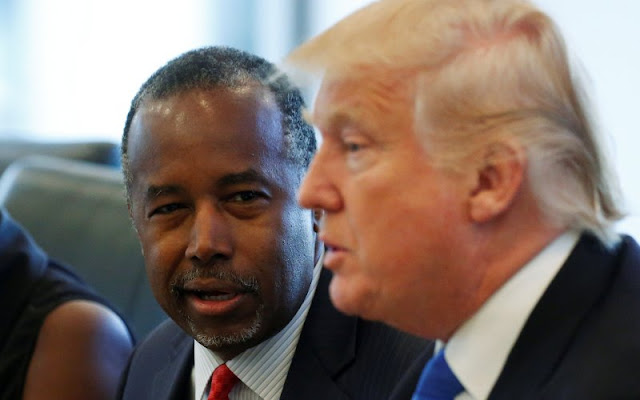 What is up with Dr. Ben Carson? Just a week after leading many of us to believe that he may have a little common sense to go along with his book sense by saying that he wouldn't serve in a Trump administration because he didn't have the experience of leading a federal agency he seems to have put himself back in the running again for a spot in a Trump administration.

What's odd is that when a position as leader of Health and Human Services was discussed (you know something right in Carson's wheelhouse) was when Carson fretted about his lack of experience. But now when Trump offers him a position leading HUD (Housing and Urban Development) he seems to be willing to consider that.

Now if you are like me you are wondering what qualifications Dr. Carson has to be head of HUD. Well thankfully for us Carson has an answer. When being interviewed by Fox New's Cavuto Carson made the following statement:

"I know that I grew up in the inner city," Carson said. "And have spent a lot of time there. And have dealt with a lot of patients from that area. And recognize that we cannot have a strong nation if we have weak inner cities. And we have to get beyond the promises and start really doing something."

So if having lived in the inner city is a top qualification that would mean that there are millions of eligible candidates for the top spot at HUD. Yes I'm being sarcastic, but I would hope any leader of any government agency would have some experience doing what that agency does, particularly at federal level.

Carson says that he will have an answer for Trump after the Thanksgiving holiday. I wonder what would make Carson change his mind on serving. It could be that he is a true patriot and has decided that if the president asks you to serve that you have to do your civic duty and serve. More likely the reason has to do with BET founder Robert Johnson's visit with Donald Trump over the weekend. Carson realized that there was a chance that he would no longer be Trump's "African American" especially with Johnson possibly in a Trump administration and himself on the sidelines.

Obviously to Carson the appeal of being a magical negro outweighs any and all common sense.