Ex-Philadelphia congressman gets 10 years for corruption 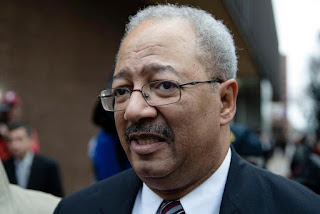 Former U.S. Representative Chaka Fattah, who served in Congress for more than 20 years, was sentenced on Monday to 10 years in federal prison for orchestrating a series of frauds to enrich himself and boost his political career, U.S. prosecutors said.

Fattah, 60, represented parts of Philadelphia from 1995 until resigning earlier this year after being convicted in June on more than 20 counts of racketeering, bribery and fraud. He had already lost the Democratic primary in April amid the corruption scandal.

Fattah misappropriated hundreds of thousands of dollars in campaign, charity and taxpayer money in multiple unrelated schemes stretching over several years, according to prosecutors.