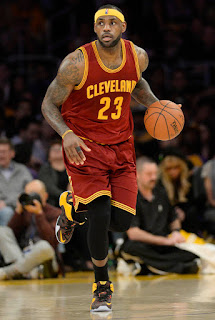 James, who ended 52 years of sports heartache by bringing Cleveland a championship and used his superstar platform to address social causes, was chosen as The Associated Press 2016 Male Athlete of the Year, an award he won previously in 2013.

Results of the vote by 59 editors from AP member newspapers and customers were announced Tuesday.

James collected 24 first-place votes, beating out a pair of Olympic legends: Michael Phelps (16) and Usain Bolt (9), the fastest men in water and on land who are not accustomed to finishing behind anyone.

"I felt fulfilled," James told the Associated Press. "To know the history of our sports here and how heartbreaking at times it was for all those years that our fans had to go through, and the circumstances that we came back from, it was so fulfilling."