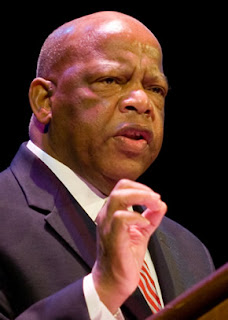 REP. JOHN LEWIS CRITICIZES REP. KING’S COMMENTS ON THE NEED FOR A “HOMOGENEOUS” AMERICA
March 13, 2017
Press Release
WASHINGTON—In response to tensions surrounding immigration during the election season in the Netherlands, Rep. Steve King (R-IA) tweeted this statement on Sunday in support of Dutch right-wing politician Geert Wilders, “ Wilders understands the culture and demographics are our destiny.  We can’t restore our civilization with somebody else’s babies.”  The statement has been widely criticized, including by the Chairman of the Iowa GOP, Jeff Kaufmann.  Well-known white supremacist David Duke, however, did indicate his support for King’s tweet.  According to a National Public Radio report, King refused to back down from the statement in an interview this morning adding, ‘”I meant exactly what I said,’ and that he’d ‘like to see an America that’s just so homogeneous that we’d look a lot the same, from that perspective,’”
Rep. John Lewis made this statement in response to King’s comment:
“My colleague has made a deeply disturbing statement because it ignores the truth about the history of this nation.  Western civilization did not create itself.  It was founded on traditions that emerged from Africa, Iran, China, Greece and Rome and other nations.
“With the exception of Native Americans, we all came to this land from some other place in the world community, and this country is a melting pot of cultures, traditions, appearances, and languages.  In order to live together as one people, we must come to respect the dignity and the worth of every human being.  It is that understanding that will make us one nation, not a homogeneous appearance.
“Rep. King’s statement is bigoted and racist.  It suggests there is one cultural tradition and one appearance that all of humanity should conform to.  These ideas have given rise to some of the worst atrocities in human history, and they must be condemned.”