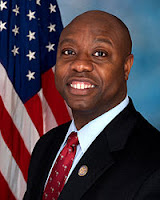 Tim Scott the only African American Republican in the U.S. Senate has denounced Iowa congressman Steve King's racist tweets in which King seems to be supporting white nationalism. Below is one of those tweets.

Wilders understands that culture and demographics are our destiny. We can't restore our civilization with somebody else's babies. https://t.co/4nxLipafWO

Here is Scott's response to those racist tweets:

“Rep. King’s comments immediately brought to mind the motto printed on our nation’s coins – e pluribus unum, or ‘out of many, one,’ ” Scott said in an email. “And as a Christian myself, I believe we are all descended from the same place. His comments stand in direct contradiction to those ideas and beliefs, and I firmly reject them.”