What Trump's executive order on HBCUs actually does 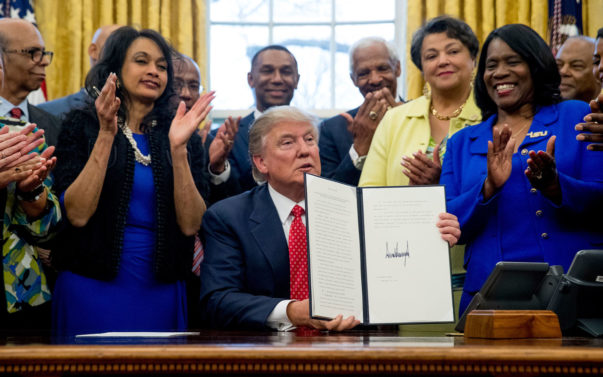 Trump made a big deal about the photo-op, oops I mean meeting he had with the Presidents of HBCUs from across the country this week. He made an even bigger deal of the executive order he signed to help HBCUs ( one that doesn't give any additional funding to the schools). The executive order itself isn't that much different from President Obama's order on HBCUs (yes he had one too), except in one way involving the White House Initiative on Historically Black Colleges and Universities.

The Trump executive order officially moves the White House Initiative on Historically Black Colleges and Universities from the US Department of Education to the White House, where it will function under the supervision of a presidentially-appointed executive director. The new order also mandates that federal agencies identified as active or potential funding matches for HBCU programs will have 90 days to submit reports to the White House on how they will leverage public and private resources to build capacity at black colleges.

The order maintains an advisory board on HBCUs, which will meet twice yearly to brief President Trump on trends among federal agencies relative to funding and industrial challenges. HBCU presidents were particularly critical of President Obama for declining to attend any of the advisory board meetings or the annual national conference on HBCUs throughout his eight years in office.

Much of the order mirrors the guiding document issued by President Obama, which similarly called for increased advocacy on behalf of HBCUs by way of agency liaisons, annual reports and increased communications between the government and institutions.

But the order does not outline specific goals sought by an advocacy coalition comprised of the National Association for Equal Opportunity in Higher Education, the Thurgood Marshall College Fund and the United Negro College Fund; most notably, an aspirational goal that HBCUs be awarded five percent of total federal grant, internship and cooperative agreement funding; and 10 percent of total federal contract funding awarded to colleges and universities, which supporters say would nearly double federal support to HBCUs.