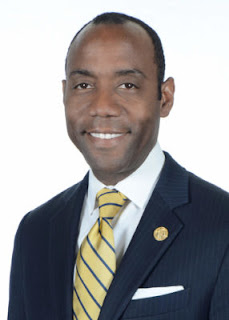 The NAACP was founded more than a century ago in response to the rampant and violent lynching of black Americans. Over the past 100 years, the black community and communities of color as a whole have experienced tremendous advancements. Yet, as we continue to march towards the arc of justice, additional barriers have been placed in our way in the forms of voter suppression: increased police brutality, over criminalization of black bodies, income inequality and inadequate health care as well as anti-immigrant sentiments.

The NAACP intends to aggressively and nimbly respond to the current climate of political unrest, as well as the assaults upon human and civil rights that threaten our very democracy, as only it can. To do so demands that the Board of the NAACP ensure that organization has the right plan and the right leadership to address these 21st-century challenges.

In keeping with its longstanding history, and legacy, the NAACP Board announced today a transformational, system-wide refresh and strategic re-envisioning. The objective is to best position the respected national organization to confront the realities of today’s volatile political, media and social climates.

Board Chairman Leon W. Russell and Vice Chair Derrick Johnson, who were elected to their current positions in February 2017, will manage the organization on an interim basis until a new leader is named. Current CEO and President Cornell Brooks, will remain at the organization until June 30th, the end of his current term.

Opinion: The reason why Cornell Williams Brooks was let go.

Article continues below the video

“Our organization has been at the forefront of America, making tremendous strides over the last hundred years,” said Leon W. Russell, chairman of the Board of Directors. “However, modern day civil rights issues facing the NAACP, like education reform, voting rights and access to affordable health care, still persist and demand our continued action.”

“In the coming months, the NAACP will embark upon a historic national listening tour to ensure that we harness the energy and voices of our grassroots members, to help us achieve transformational change, and create an internal culture designed to push the needle forward on civil rights and social justice,” said Derrick Johnson, vice-chairman of the NAACP Board of Directors.

In their announcement today, the NAACP Board made it clear that everyone will have a place at the table, including its invaluable staff, the new movements for social change, local organizers helping to rebuild our neighborhoods, the faith leaders and other traditional and historic African-Americans organizations that provide much needed services to their communities, social justice advocates tackling income inequality, the millions of marchers who have taken to streets for women rights and immigrant rights, the activists who are fighting for equality for the LGBTQ Americans, business leaders and philanthropists lending private sector support, and the long-time civil rights guardians who have spilled blood so that we can enjoy the freedoms we have today.

As part of that commitment, the NAACP Board also announced today that they will embark on a listening tour, for the first time in its history. As the organization reimagines ourselves, it is determined to be formed in the likeliness of the people whom it serves – and to do so, the Board will work to see, meet and listen to them.

“These changing times require us to be vigilant and agile, but we have never been more committed or ready for the challenges ahead. We know that our hundreds of thousands of members and supporters expect a strong and resilient NAACP moving forward, as our organization has been in the past, and it remains our mission to ensure the advancement of communities of color in this country,” said Russell.

Founded in 1909, the NAACP is the nation’s oldest and largest nonpartisan civil rights organization. Its members throughout the United States and the world are the premier advocates for civil rights in their communities. You can read more about the NAACP’s work and our six “Game Changer” issue areas by visiting NAACP.org.

Leon W. Russell was elected as Chairman of the NAACP Board of Directors in February 2017. Prior to assuming that role, Russell served as Vice Chair of the NAACP Board and has been a board member for over 27 years. He served as President of the Florida State Conference of Branches of the NAACP from 1996-2000, after serving for fifteen years as the First Vice President. He is also the former assistant secretary of the Board and the former Director of the Office of Human Rights for Pinellas County Government, Clearwater, Florida from 1977-2012, where he was responsible for implementation of the county’s human rights and affirmation action ordinances. The recipient of numerous civic awards and citations, Russell was also elected for two terms as the President of the International Association of Official Human Rights Agencies. The IAOHRA represents civil rights agencies from the US and abroad responsible for enforcing state and local civil rights laws and the promotion of inter-group relations.

Derrick Johnson was elected as Vice-Chairman of the NAACP Board of Directors in February 2017. Before taking this position, Johnson was the State President of the Mississippi NAACP and Executive Director of One Voice Inc. A former Mel King Community Fellow with Massachusetts Institute of Technology (MIT), Johnson also serves on the Board of Directors of the Congressional Black Caucus Institute, Mary Reynolds Babcock Foundation, and as an adjunct professor at Tougaloo College.