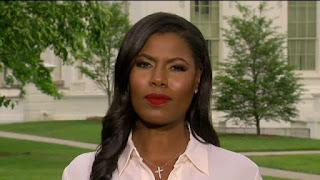 Ahhh, poor little Omarosa Manigault ( or should I say Honorable Omarosa Maigault..LOL) seems upset that the Congressional black Caucus turned down an invite to meet with Trump a second time, and is having a temper tantrum. It must've hurt to come to the realization that she has about as much pull with African Americans as Trump does...LOL. George L. Cook III AfricanAmerican Reports.Com

Manigault told Fox Business Network's Charles Payne that members of the Congressional Black Caucus (CBC) on Friday of "showboating" and refusing to serve their constituents, after the lawmakers refused an invitation to meet with President Trump. watch video of that segment below.