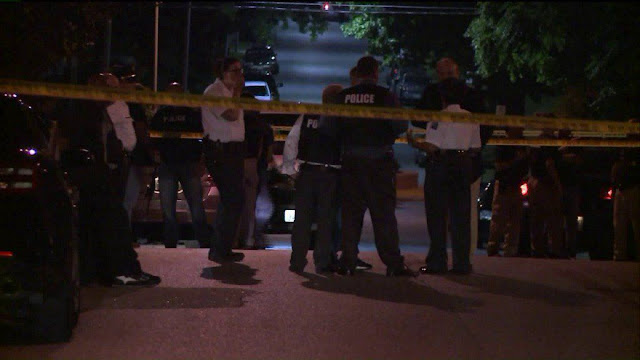 As black people we have all learned that there are several things you can't do while being black unless you want to be shot by the police. You know things like, walking, talking, or breathing. You can now add being a cop to that list as black police officer found out the hard way in St. Louis after being wounded by a fellow officer. And yes, the officer who shot him claimed he feared for his life although other officers at the scene had told the black cop to approach them after CONFIRMING that he was a cop. Sadly the most that may happen to this trigger happy cop is that he looses his job. SMH. George L. Cook III AfricanAmericanReports.Com

An off-duty black St. Louis police officer's race factored into him being mistakenly shot by a white officer who didn't recognize him after a shootout with black suspects this week, the wounded officer's lawyer contends.

The 38-year-old black officer was off duty when he heard a commotion near his home and ran toward it with his service weapon to try to help his fellow officers, police said.

St. Louis' interim police chief, Lawrence O'Toole, said the incident began when officers with an anti-crime task force followed a stolen car and were twice fired upon by its occupants. One suspect was shot in an ankle and was arrested, along with another teenager who tried to run from police, O'Toole said. A third suspect is being sought.

When the off-duty officer who lived nearby heard the commotion and arrived at the scene Wednesday night to help, two on-duty officers ordered him to the ground but then recognized him and told him to stand up and walk toward them. As he was doing so, another officer arrived and shot the off-duty officer "apparently not recognizing" him, police said.

The police department as of Saturday hadn't disclosed the names of the officers, who have been placed on routine administrative leave as the matter is investigated. Police described the black officer as an 11-year department veteran and said he was treated at a hospital and released. The officer who shot him is 36 and has been with the department more than eight years.

The black officer's lawyer, Rufus J. Tate Jr., discussed the shooting with St. Louis Fox affiliate KTVI, but the officer isn't named in that report. Tate told the station that his client identified himself to the on-duty officers at the scene and complied with their commands. The lawyer questioned the white officer's account to police that he shot the off-duty officer because he feared for his safety.

"In the police report you have so far, there is no description of a threat he received. So we have a real problem with that. But this has been a national discussion for the past two years. There is this perception that a black man is automatically feared," Tate said.