Black gun owners ask: Does the Second Amendment apply to us? 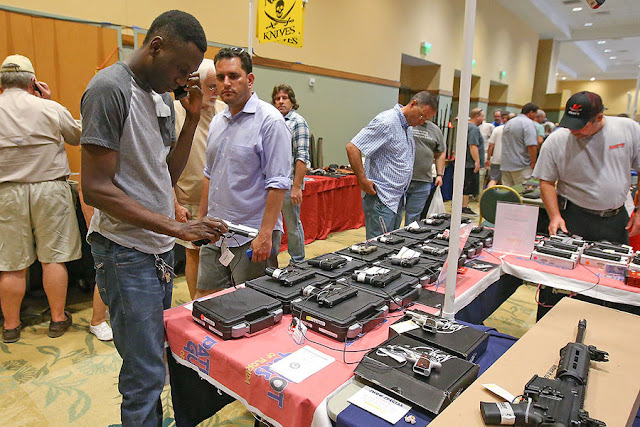 There's evidence that black gun ownership has spiked since the 2016 campaign began. While white Americans have led the liberalization of gun laws in the past decade, black gun carry is becoming a test of constitutional agency.

Like many African-Americans of his generation, Phillip Smith, a Californian in his 50s, grew up without a gun in the house. To his parents, gun ownership was not just politically unacceptable, but morally wrong – a fount, if anything, of trouble and tragedy.

When he moved his own family to the South in 2002, he found a different tradition, where black families, many of them fresh from the farms, had hunting rifles for sport and, to an extent, self-defense. Mr. Smith was intrigued. As he bought his first guns and began practicing at a gun range, he had an epiphany: Perhaps the Second Amendment is the black man’s ultimate sign of full citizenship.

Smith’s crossover into the world of guns and ammo makes him part of a widening attempt to, as he says, “normalize” a black gun-carrying tradition fraught with historical pain and tragedy.

His advocacy for African-American gun rights has turned out to be a potent message. The National African-American Gun Association he founded has grown from 800 to 20,000 members since 2015. Unlike the primarily white and male National Rifle Association, NAAGA is diverse in both color and gender; 60 percent of its members are women.

“The main thing – and I’d be lying if I said something else – is that in the last 18 months the racial tone of the country has tilted in a direction that is alarming, at a minimum,” says Smith, who lives in an Atlanta suburb. “For African-Americans, we’re seeing the same old faces, the same type of conversations we saw in the ‘50s and ‘60s, and we thought they were dead and gone.”

Given that white Americans have led the liberalization of gun laws in the past decade, black gun carry is becoming a test of constitutional agency, injecting what University of Arizona gun culture expert Jennifer Carlson calls the specter of “legitimate violence” into an already tense political climate. Incidents like the June acquittal of the Minnesota police officer who shot Philando Castile, a legal gun owner, during a traffic stop have added to that tension, gun owners like Smith say – as did the National Rifle Association’s silence over both his shooting and the verdict.

For some black gun owners, the question is a stark one: Can African-Americans reasonably expect to be covered by the Second Amendment in a country still marbled by racist rhetoric, attitudes, and acts?

Read more: Black gun owners ask: Does the Second Amendment apply to us?