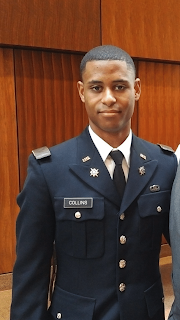 A grand jury indicted a white former University of Maryland student for murder on Thursday in the stabbing death of a black U.S. Army officer that is still being investigating as a possible hate crime, authorities said.

Sean Urbanski, 22, of Severna Park, Maryland, who was a member of a racist Facebook group, was indicted for common-law murder over the on-campus death of Lieutenant Richard Collins III in May, said John Erzen, a spokesman for the Prince George's County state's attorney.

"Right now, the investigation into the motive, including whether it was a hate crime, is still ongoing," Erzen said in a telephone interview.

The Federal Bureau of Investigation was helping police analyze Urbanski's digital devices. "We expect that to conclude in the coming weeks," Erzen said. A police investigation showed that Urbanski was part of the Alt-Reich group on Facebook, where members post disparaging material about African-Americans, Jews and others.

Erzen said prosecutors planned to seek life without parole for Urbanski, who remains jailed without bond. His attorney, William Brennan, did not respond to a request for comment.