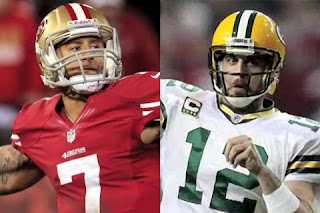 Many marquee African American player such as Michael Bennett, Richard Sherman, Brandon Marshall, and Marshawn Lynch have come out in support of Colin Kaepernick, and openly question why the QB does not have an NFL job yet. Many are waiting for a marquee white player to come out in support Kaepernick and it looks like Green Bay Packers QB, Aaron Rodgers is that player. George L. Cook III African American Reports.

You won't find Aaron Rodgers kneeling during the national anthem this season, but in a recent interview with ESPN's Mina Kimes, the Green Bay Packers offensive captain revealed he has no issue with players who do choose to protest.

That includes fellow quarterback Colin Kaepernick, who's still waiting for a job offer less than two weeks before the start of the 2017 season. Kaepernick became a national figure last season, when he popularized the practice of not standing during the national anthem in protest of racial injustice in America.

Rodgers said it would be "ignorant" to believe that the lack of interest has nothing to do with Kaepernick's history of activism.

"I think he should be on a roster right now," Rodgers said. "I think because of his protests, he's not."

While Rodgers will continue to stand for "The Star Spangled Banner," he plans on supporting his teammates who choose to follow Kaepernick's example. He mentioned that conversations with two of his teammates, wide receiver Randall Cobb and tight end Martellus Bennett, have helped him to better understand the motives behind the protests; Bennett is the brother of the Seahawks' Michael Bennett, one of the NFL's most prominent protestors.

"I'm gonna stand because that's the way I feel about the flag – but I'm also 100 percent supportive of my teammates or any fellow players who are choosing not to," he said. "They have a battle for racial equality. That's what they're trying to get a conversation started around."