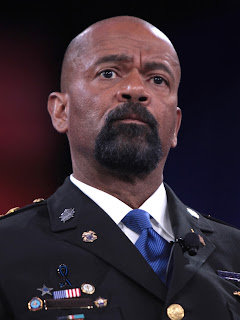 In a surprise move Milwaukee County Sheriff David A. Clarke Jr. resigned today. Although he gave no reason he may have resigned due to the investigation of his jail, or the highly likely chance that he would not win re-election, or that he found out that impersonating Uncle Ruckus for conservative media very well. Read more about his resignation below. George L. Cook III African American Reports.

Clarke, who is in his fourth term, submitted a resignation letter to Milwaukee County Clerk George Christenson on Thursday afternoon. The sheriff was attending the convention of the National Fraternal Order of Police in Nashville and could not be reached for comment.

"Pursuant to Wisconsin Statute 17.01, this communication is submitted as the notice of my resignation as Sheriff of Milwaukee County commencing Aug. 31, 2017, at 11:59 p.m.," stated Clarke's resignation letter.

He has not said what his plans are.