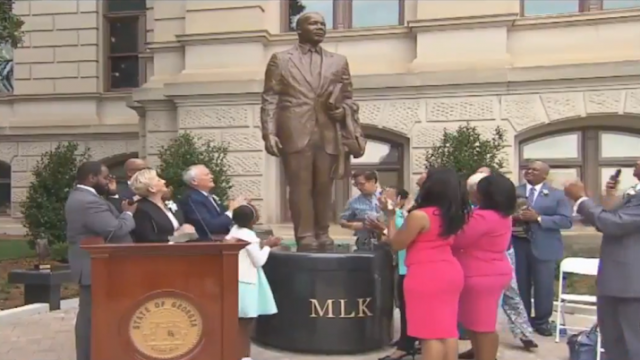 The daughter of civil rights leader Martin Luther King Jr. stood beside her father's newly unveiled statue Monday, just a few blocks from where he grew up, handing out hugs and telling each well-wisher: "It's about time."

The statue paying tribute to King made its public debut Monday on the Georgia Capitol grounds in front of around 800 people including Gov. Nathan Deal, many other state political leaders and several members of the King family. The sculpture's installation comes more than three years after Georgia lawmakers endorsed the project.

"Forty-nine years ago when my father was assassinated, he was the most hated man in America. Today, he is one of the most loved men in the world," the Rev. Bernice King said of her father, who was slain in 1968 in Memphis, Tennessee.

A replica of the nation's Liberty Bell tolled three times before the 8-foot (2.4-meter) bronze statue was unveiled on the 54th anniversary of King's "I have a dream" speech at the 1963 March on Washington. The sculpture depicts King in mid-stride, as his left arm holds an overcoat while grasping a batch of papers.

"Today, we as the sons and daughters of former slaves and former slave owners are here to witness the unveiling of that statue," Bernice King said. "It is a glorious and grand day in the state of Georgia and in the United States of America and all over the world."