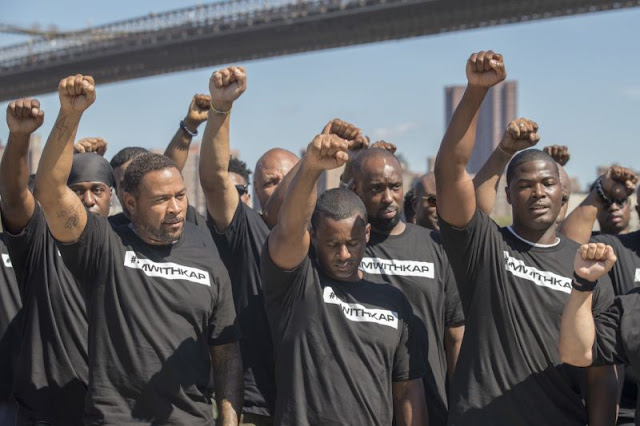 A local lawmaker was joined by 100 law enforcement officers, who took a stand in solidarity with Kaepernick.

"All of the people behind me risk their lives, so to speak, to protect folks, and they are standing with Kaepernick because they understand how important it is to push back on the structure," City Councilman Jumaane Williams of Brooklyn said, with the officers standing behind him.

Kaepernick has been criticized for putting politics on the NFL playing field by sitting and kneeling during the national anthem before his games with the San Francisco 49ers last year. He was protesting police brutality.

No team has signed the now-free agent. Several players say teams are colluding to keep Kaepernick out of the NFL.

Posted by Councilman George L. Cook III at 9:05 AM

So, black people ..... Let me see if I have this correct .... after over 200 years of historical black colleges the strategy is .... hit white people in their pockets with a defacto NFL boycott to show and prove to white people how valuable we are to them as slaves ....is that the flavor because Lord knows there is a better, brighter, more effective way .

The "black out" strategy is a dumb, dumb strategy and it is an insult to institutions of higher learning that can only leave learned people scratching their heads, wondering out loud ... where have our tax dollars gone because you guys lack the collective intelligence to formulate a strategy of any worth ....... GRADE F.