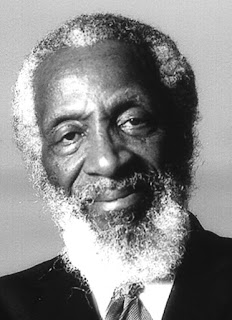 The NAACP has released the following statement on the passing of civil rights icon, writer, and comedian Dick Gregory.

The NAACP mourns the death of comedic legend and civil rights icon Dick Gregory, who passed away today at age 84. Gregory broke down the barriers of segregation in American comedy and entertainment, and consistently lent his celebrity status to the ongoing fight for civil rights.

The author of numerous books, comedy and spoken word albums, Gregory recently released a new book, “Defining Moments in Black History: Reading Between the Lies.” Noted as an independent researcher and scholar of a variety of unorthodox knowledge, he segued from his position as one of the nation’s leading comics, to a civil rights activist after friend and former NAACP Mississippi state field secretary Medgar Evers was assassinated in 1963 by a white supremacist.

“Dick Gregory was an activist and creative genius who knew the struggle for liberation could only take flight if prominent individuals like himself leveraged their considerable influence, and joined the masses on the front lines of the dismantling of Jim Crow,” said NAACP Board Chairman Leon W. Russell. “We have lost one of the most important voices of social justice vigilance in the last fifty years. His intellectual style of humor defied racist stereotypes, eschewed buffoonery and provided white America rare insight into the unquestionable humanity of Black people,” added Russell.

Gregory would frequently march along side the Rev. Dr. Martin Luther King, Jr., and considered late Muslim leader Malcolm X a friend. Later in his career, he would spend time on Radio One’s WOL-AM in Washington, DC with media magnate and good friend Cathy Hughes, providing analysis of the Black struggle, and advocating African American economic self-help, health and nutrition.

“Our brother in the struggle, Dick Gregory will be sorely missed,” said NAACP interim President Derrick Johnson. “He, along with people like Harry Belafonte and Paul Robeson pioneered the use of celebrity as tool to push for social justice. Our community and nation owes a great debt to him for his decades of work to eradicate racism.”