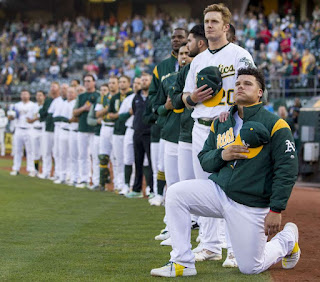 Looks like Trump's attack on black athletes in the NBA and NFL has backfired and has now spread to Major League Baseball.

Bruce Maxwell, son of a US Army veteran and Oakland As backup catcher became the first Major League Baseball player to kneel during the National Anthem. He did so after talking with his teammates and the general manager.

“It was one of the hardest things I’ve ever had to do. These guys are my family; the Oakland A’s is the only family I’ve ever had in professional baseball. So being able to sit down and confidently have this conversation with David and with Bob Melvin and with my teammates before the game was something huge that I felt like needed to be done.”

Maxwell plans to continue to kneel for the anthem in the future: